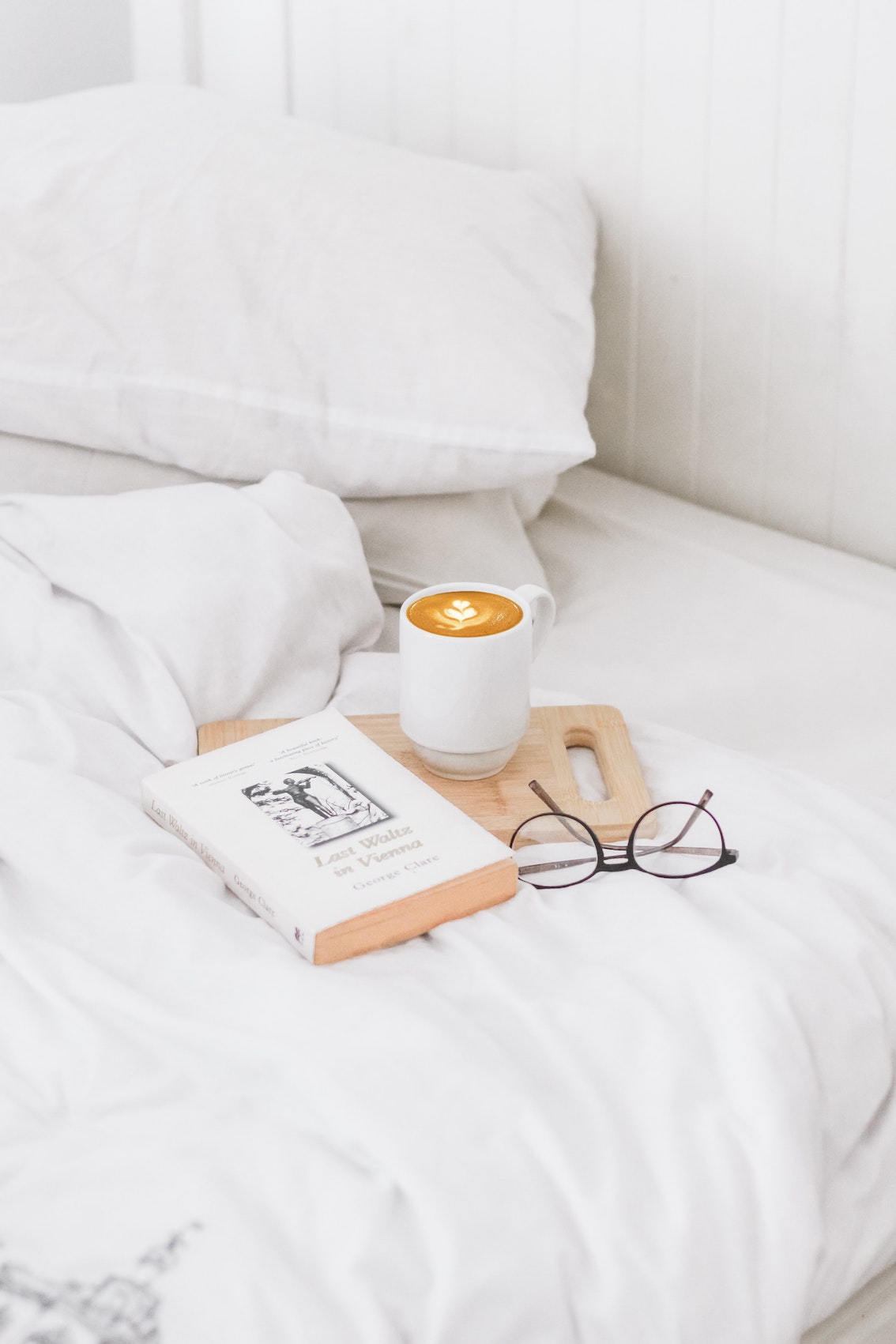 Let’s start with the big news first, shall we? I washed our sheets. Even the mattress protector and duvet. And I will admit it does feel nice to crawl into crisp, clean sheets.

Last weekend was tough. My period started Friday night (just what the internet needed to hear), and since this fact impacts my life in very direct ways, it coloured my weekend. I emerged from Saturday relatively unscathed; we’ve been working on a major overhaul of our furnace/storage room and the transformation was rewarding. John spearheaded the project and it looks and functions so well. We had celebratory sushi takeout for supper. All good so far.

But Sunday I woke up feeling absolutely lousy. The instant I opened my eyes I could tell everything was…off.

My energy drain is both physical and mental. And while I love margin and puttering, I get to a stage where I’m run down (but not sleepy) and nothing seems to make me feel better. Not even organizing a sock drawer. I’m just off. And I felt SO off all day Sunday. When I’m in that state it can literally feel like I will never be okay again. (Anyone else?)

And then I realized one of the reasons I find these cyclical downs so hard is because I lack any sense of control. This is a fact. I can’t control when my period comes or how terrible it is. And with all sorts of fun summer plans ahead, it also felt heavy knowing that I have landmines like this to navigate, often away from the comfort of my own home.

I woke up on Monday and felt better. Was the week terrific? Nope. Plenty of moments when I felt drained. But such is life. Some things simply have to be endured, for now at least.

But there is also much good to counterbalance any hard. This includes the weather forecast for next week which shows only sunshine icons. April went overboard in the whole rain-and-grey-skies department. Let’s bring on the sun…and do some #joyfinding. It’s been awhile.

LISTENING | I have all but stopped listening to podcasts. It just isn’t the right season of life for me. I haven’t been walking solo, can’t listen to them while I work, and don’t have a commute (the 30 seconds it takes to walk downstairs to my office doesn’t really count). And I’ve never gotten into audiobooks. Mostly, I suspect, because I like to skim/re-read and take notes, all of which is virtually impossible with an audiobook. But…John and I have started walking together while listening to an audiobook (we each take one AirPod), and it has been great. Currently listening to Charles Cuhugg’s The Power of Habit (I’ve read this book before).

READING | Reading has been a bit of a slog lately. I got a huge stack of promising books from the library and most of them were, in Abby’s words, “duds“. Perhaps because they had been recommended to me, so my expectations were a bit higher?

Notes on a Nervous Planet? Loved it. Midnight Library? Not a fan. The Comfort Book? It was fine, but…a weak 3/5 for me. I just can’t figure Matt Haig out.

The first 30 pages of This One Wild and Precious life? Solid. The next 250. Ugh. Circular writing, confusing tone changes. But my biggest quibble: the author talks at length about her disdain for anyone that uses a single-use cup, discussing times she approached strangers at coffee shops to (kindly) berate them…but then she flies all over the world to go on hikes. She does try to explain this away, but it soured my perception. I skimmed the whole book waiting for it to get better but, alas, it didn’t (for me).

I’m not listing two other, recommended books, I didn’t even finish. So much disappointment.

I appreciate so many insights/quotes from C.S. Lewis’ body of work but have to wave the white flag on reading his non-fiction. Surprised by Joy was all about his early life/spiritual journey and contains one of my favourite quotes…but the book as a whole was a tedious read for me.

Taste: My Life Through Food by Stanley Tucci. Hilarious. Fun.

I’m still reading little bits of All Creatures Great and Small by James Herriot and enjoying that.

One good picture book this week, Oi Frog – the kids found it hilarious (as did I). Also reading and loving the weekly poems posted on our neighbourhood loop which were timely: one about blossoms and another about how people in our local area love to collect things during Big Garbage Day.

WORK | What a roller coaster. I knew the middle of May was going to be busy with many converging deadlines and little opportunity for proactive preparation. I ended Friday on a high, thinking I had gotten a few major things completed, only to have a complete crisis on Sunday as I realized there was a good chance I had misinterpreted the brief and worked hard to prepare…the wrong things. On Monday I admitted I had no idea what I was doing and what was required. Turns out a whole bunch of things I thought I had to do…I don’t have to do. And one particularly gnarly task I get to explain away with a single sentence. Phew.

NOTABLE EATS | John and I had takeout sushi Saturday (for the first time in almost 2 months) and…yum.

I bought a small ham at Easter and made a special orange juice/brown sugar/cinnamon sauce for Monday’s supper. This meal takes me back. It was a family favourite when I was growing up, and the first thing I ever cooked for John when we started dating. I made mashed potatoes (thanks to my friend kindly donating 6 potatoes; I use so few potatoes and am loathed to buy a big bag). Also…yum.

Ready for a weird but true factoid. I can remember a specific The Rest of the Story episode by Paul Harvey that relates to this meal. It was all about a nanny (working for a wealthy family about to travel on the Titanic) who had a nightmare the boat would sink. I think she boarded the boat anyway and survived? Can’t remember the specifics now, but do remember I was eating this ham-in-orange-sauce + mashed potatoes meal when I heard it on the radio. Isn’t it fascinating what little details – I was probably 6 or 7 at the time – our minds store away.

Speaking of the Titanic…

maritime museum of the atlantic

The Maritime Museum of the Atlantic has been on our radar for several years and we finally made it (the kids had a half-day of school on Tuesday).

What a great experience! We saw a torpedo and learned all about the inner workings of that device; it strikes close to home as my grandfather was in the Canadian Navy during WWII and his ship was torpedoed and sank. (He survived.)

We explored a display about the Halifax explosion in 1917 (at that point, the largest human-made explosion in history); 9,000 people were wounded, almost 2,000 died. My kids have learned a lot about this event in school, so to see actual wreckage was both heart wrenching and an incredible immersion in history.

I loved that kids were allowed to touch so many of the items on display . I remember being at the Canadian War Museum in Ottawa where one enormous room houses military vehicles…and kids aren’t allowed on them. I understand matters of liability and we always respect the signs, but when I asked a worker if they really could touch the ships (and twisted metal artifacts from the Halifax explosion), she said it was encouraged!

There was a volunteer who builds miniature ship models (to scale). We stopped by his kiosk for a while to marvel at the intricacies of his work. There was a parrot. Wasn’t expecting that!

This cabinet is the only intact piece of cabinetry that survived the sinking; seeing the carved newel-post from the Grand Staircase gave me chills.

The highlight for the kids ended up being the interior replica of a fishing boat. There were cupboard doors to open and explore, a small window/TV screen that heaved back and forth making it look like you were out on the open ocean. There was even a small (fake!) rat on the pitched floor. They loved this spot!

On our walk back to the parking garage we found a painted rock to rehide, and I had a chuckle over some marketing. A caffeine bar? Maybe this is a new thing? I suppose dry bar hair salons are very hip (or maybe they’re no longer hip; I’ve never been). Why not spin the marketing for coffee and tea, I suppose…

Things will slow down in this space over the summer; I’m going to post less frequently and, well, generally fly by the seat of my pants in both life and writing. But I’m keen to have some ideas waiting in the wings. Any burning questions for me or topics you’d like to see covered in more detail/again on the blog?

That’s it from me this week. Did anyone else grow up listening to The Rest of the Story by Paul Harvey? I listened to an episode on YouTube and his voice made me so nostalgic!