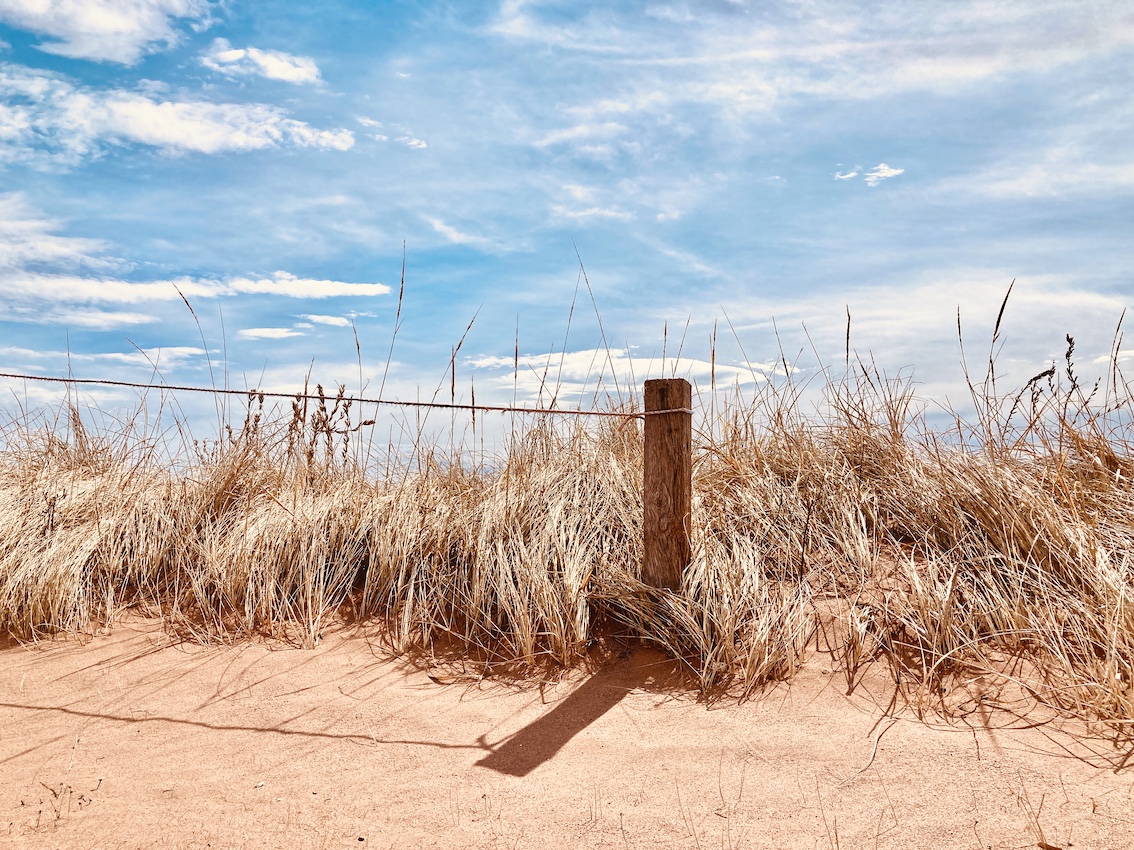 You might think the timing of this trip is directly related to my recent foray into all things Lucy Maud Montgomery…but you’d be mostly wrong.

Really, this reflects the sad truth that we live only three hours from a beautiful province and haven’t visited for A DECADE.

We have good excuses; we spend summer vacation time at my parent’s lakeside home in New Brunswick, which is delightful.

Also, Prince Edward Island (PEI) is a province utterly transformed in the summer; there are people everywhere. It’s hard – and expensive – to find accommodations. We also aren’t the type of family who enjoys spending half an hour searching for parking spaces at a crowded beach or amusement park. (I mean, does anyone enjoy that? I guess it would be more accurate to say we are the type of family that actively avoids crowded beaches and amusement parks.)

And, perhaps most importantly, we love exploring our home province of Nova Scotia (check out my Travel page for some highlights), which is stunning in the summer.

So, at the last minute, we decided to trek to PEI. The kids had a random Friday off school and we’re trying to be intentional about making the most of family adventuring while John is on sabbatical. And there is NO shortage of accommodations in the off-season (as busy as PEI gets in the summer, it is “dead” in the winter/spring).

And, yes, I’ll admit that reading the Anne books gave me a final nudge.

We only stayed on the island for one night. I’ll recap our adventures from Day One today and come back tomorrow with Day Two.

We hoped to be on the road by 7 am, but the kids were awake early enough that we were driving by 6:45 am. It’s always a great (and rare) feeling to be ahead of schedule.

I tasked Abby with making some PB&J sandwiches for the car, and the kids ate these for breakfast en route.

Side note regarding food for the trip. Between frugality and finding food stops to be very time-consuming, we prefer to travel with items from home. We packed some ham and cheese sandwiches for the day (and brought jars of PB&J + mini brioche buns to make more sandwiches if needed), hard-boiled eggs, apples, oat muffins, carrot sticks, and a big jug of water, so we didn’t stop to eat until supper time; on Day 2 we had breakfast included at the hotel and then just ate remaining picnic items the rest of the day).

The kids were absolute rockstars on this trip. They’re used to spending time in the car and seem to understand the delayed gratification necessary to enjoy adventures. I also think we’ve reached the ideal stage for this sort of thing: they’re old enough to be out of diapers and naps but young enough to get excited with simple activities.

The first hour of the drive we spent talking about…I can’t remember what?! Then the kids mostly just listened to audiobooks.

Levi, sadly, had fallen asleep in a very rare car nap and missed our bridge crossing. There isn’t much to see because the sides of the bridge are so high, but it is still an impressive and fun part of the trip.

The Confederation Bridge links PEI to the mainland of New Brunswick and is the world’s longest bridge that crosses ice-covered waters. At 12.9 km, it is a long bridge by any standard!

Our first stop was Cape Egmont. The dirt road leading down to this lighthouse was treacherous (muddy and deeply rutted), but we made it in – and out – in one piece.

One of our family “things” is visiting lighthouses. We’ve gone to at least 60 now, and it’s a fun unifying theme for our vacations as we actively seek out new lighthouses wherever we go.

Of the 7 (!!) lighthouses discovered on this trip, we agreed this was the prettiest (it would be even nicer in the summer with green grass standing out in sharp relief to the red cliffs).

West Point is the “poster” child of lighthouses for the island. It actually has a (run-down) motel associated with the lighthouse, so you can book accommodations that attach to the lighthouse. It was pretty and tall, but we didn’t stick around too long and the beachfront was nothing spectacular.

When we left West Point Lighthouse, we drove by Cedar Dunes Provincial Park. The kids spotted playground equipment and we made an impromptu stop. I did a 1 km walk while they played, and then we grabbed lunch from our picnic bag before heading off to the northern tip of the island.

While PEI is very small, it still felt like North Cape was a long trek into the middle of nowhere. It is the northernmost tip of the island and I was shocked by how windy it was; when we discovered the Wind Energy Institue of Canada is located on the premises, it made a lot of sense. (There were wind farms everywhere and they have giant turbine pieces on display for the public.)

North Cape is also home to the longest natural rock reef in North America (who knew?), extending almost two kilometers offshore from the cliffs. On a warmer day we might have explored the beach and looked for all the promised sea life, but the kids and I quickly admitted we were freezing and headed back to the car…where I realized my keys were in the trunk (not a good place for keys when a car is locked) and John was nowhere to be found.

I was feeling bummed. It was cold and windy. The lighthouse was rather industrial and run-down. And it had been a long drive. I called John to ask him to come to unlock the car and he said he’d be right back…but we might want to consider coming to see the rock formation he had discovered on the beach.

These pictures don’t do this space justice. The kids had a great time playing in the smaller caves and cutouts and there was a small cove/tiny beach on the other side of the formation that was protected from the wind. It was a hidden oasis I suspect few people visiting the area discover!

Thunder Cove has one of the best spots for viewing the iconic red sandstone cliffs of PEI. We were warned in advance, though, to CHECK THE TIDES.

So…we CHECKED THE TIDES and opted to visit 4 hours after high tide. We walked down the beach to reach the most famous landmark – the Teacup formation. Unfortunately, we hit a roadblock in the form of some very cold water and an incomplete tide. The water was still too high to get around the bend to view the teacup formation. Whomp, whomp. So, a friendly word of advice: CHECK THE TIDES and then visit at the lowest tide possible!

We ended up finding an alternate route that left us quite muddy (note to self: allowing Abby to wear light blue jeans was a mistake), but the mess was worth it! Such a pretty formation.

The New London Lighthouse was probably my favourite lighthouse, largely due to nostalgia.

When I looked up filming locations from the Anne of Green Gables films, most spots were actually in Ontario (which is a bit of a letdown for movies featuring PEI). But one lighthouse scene was filmed on the island and happened to be smack dab in the middle of our return route to Charlottetown, so we made a quick stop.

Again, this would be nicer in the summer with tall green grass, but we tried to take a picture that highlighted the pop-culture significance of the location and I would definitely consider coming back here for a longer visit on a warmer day as it was a lovely spot (complete with a staircase that led to nowhere, which the kids thought was hilarious).

Our final stop for the day was Lucy Maud Montgomery’s birthplace, which we happened upon by accident. John saw a sign out of the corner of his eye, and we made a hasty turn into the empty (everything. is. empty. in. the. offseason!) parking lot so I could take a look around.

And here, around a certain corner, is a certain small, yellowish-brown house, close to the road, that I always look at with a kind of fascination, for it is the house where my father and mother lived after their marriage, and where I was born and spent the first year of my life. The years have passed on and each succeeding one has left the little brown house something shabbier than before, but its enchantment has never faded in my eyes. I always look for it with the same eager interest when I turn the corner.

It’s no longer brown but reading her quote on the placard gave me goosebumps!

I’ve lost count of how many times I’ve used Gretchen Rubin’s line about: The things that go wrong often make the best memories and I got another chance during this trip.

We were tired after a long day and when we confidently pulled up to the front entrance of our hotel, you could practically hear angels singing. Come to find out we were trying to check in to the WRONG hotel. There were two hotels with the same name in Charlottetown, which I didn’t realize when I keyed our destination into the GPS. It ended up costing us about 20 minutes and I was very grumpy about my mistake.

But, sometimes the things that go wrong do make good memories and the kids seem to think it’s both thrilling and hilarious that I made this mistake and it has become part of our family story about the trip.

Once we got settled at the right hotel, we headed to the pool – the waterslide was 105 ft long and very fast and very fun.

We found a local restaurant and ate a quick supper and were back to the hotel around 8:00 pm for some snacks in bed (which we brought from home) and a few more episodes of Race Against the Tide.

Just for kicks, I thought I’d show you my screentime report from this Friday! Between taking photos, Googling everything, and using the GPS (how did people travel before GPS and Google?)…well, there were a lot of screens.

And that’s a wrap on Day One. I know there many loyal Anne of Green Gables fans out there, but I feel like PEI is an obscure travel destination – has anyone reading here ever visited PEI?