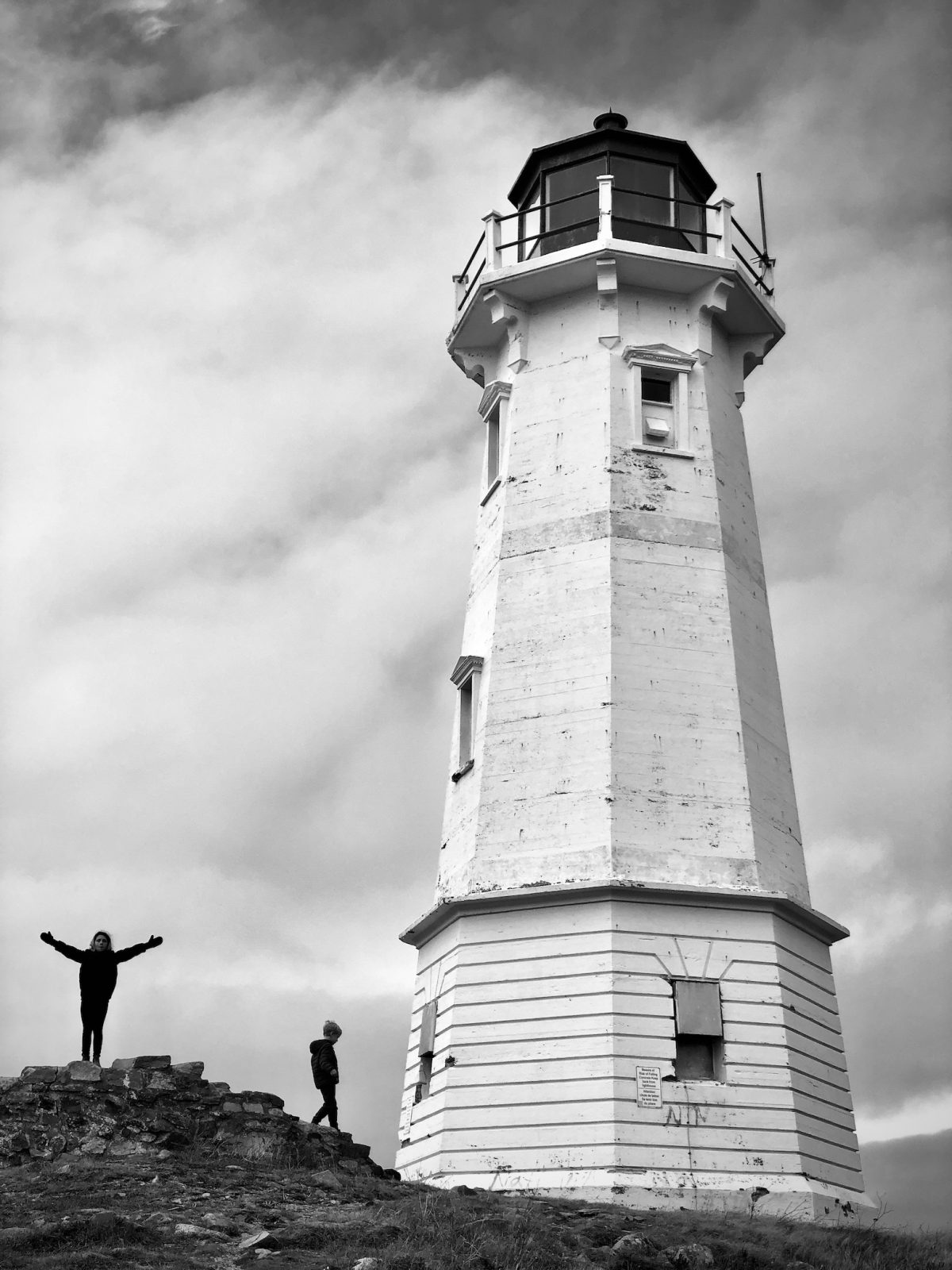 Around this time last year our family completed a trek around the Cabot Trail – a 300 km highway that winds through the Cape Breton Highlands offering stunning views of the ocean, woodlands, and other-worldly rock formations.

There are countless itineraries put forward by travel bloggers and Tourism Nova Scotia. This is not going to be of that sort of caliber. I didn’t actually research very much. We were traveling close to the Thanksgiving/fall foliage peak season (even during COVID conditions) and accommodation choices were limited. We didn’t book a whale-watching excursion or eat fresh seafood or overnight in a yurt. But it was a great family trip, nonetheless.

Before we even got out the door, our trip hit a major snag. Somehow, despite it being a last-minute vacation, we managed to book all our accommodations for the WRONG weekend. A few days after booking, John woke one morning with the vague sense something was wrong and quickly realized we had selected the wrong dates! Aside from one of our accommodations, we were able to maintain accommodations at the same locations…although that one change ended up being quite memorable (and not for the best of reasons).

We picked the kids up from school at lunchtime on a Thursday and started the trek toward Cape Breton. The kids were phenomenal in the car. We ate lunch in the car en route (I packed a bento-style, self-contained lunch for each of the kids) and then we stopped for a picnic supper at a lighthouse along the way, before heading off to our final stop of the day: Sydney.

We ended up arriving in Sydney around 6:00 pm. After checking in at our hotel, we decided to explore the waterfront boardwalk and visit the World’s Largest Fiddle, which we could see from our hotel window.

On our way to collect warm coats from the car, Levi tripped in the parking lot, getting some nasty abrasions on his hand with various rock shards embedded for good measure. Poor fella. We got First Aid supplies from the front desk and John and Abby headed off alone while I tended to the walking wounded. Levi made a speedy recovery, though his hand was a bit sore the rest of the weekend.

One of the main reasons we selected our hotel was because of its advertised waterslide. Our kids, like most others, love hotel waterslides. Because of COVID restrictions, we had to book a pool time, and they were elated when our allotted time finally arrived. Enthusiasm waned quickly; the pool was cold, the waterslide was cordoned off, and the hot tub was drained. Hmmm. Win some, lose some. We stayed for 15 minutes – long enough that everyone was freezing and soaked – and then piled back into our hotel room for hot showers and an early evening of popcorn and a movie, which is often the highlight of these trips for our kids anyway.

Friday morning we woke early, tried again to visit the giant fiddle as a family (this time with success), and spent the rest of the morning at Louisbourg.

After Peggy’s Cove, Louisbourg’s is likely the second most iconic lighthouse in Nova Scotia.

The lighthouse was stunning and gave great views of the fortress across the harbour. There were rocks for climbing (basically all that is required for our kids to have a good time), and a pile of rubble from the original lighthouse – the first in North America to be constructed with fireproof building materials.

While COVID had forced the staff of Louisbourg to stop many of their regular demonstrations, we were impressed with the scale of the fortress and had a fun time exploring the grounds.

Next up was Ingonish. In my quick-and-dirty research leading up to our trip – and given our family’s penchant for lighthouses – I thought I had found a winning ticket. A lighthouse converted into ice cream parlour. Yes, please! It required a detour (40 minutes round trip) and I had been unable to get confirmation the site was still open for the 2020 season. We decided to go for it.

It was closed. Whomp, whomp.

We made up for that disappointment with a great hike that started on the perimeter of the famous Keltic Lodge (Middle Head Trail). We randomly found a geocache, which the kids were delighted about, and it felt good to stretch our legs after lots of car time.

It was interesting how few locations there were for eating/sleeping on the Cabot Trail itself. Finding a place open/available (we found a spot that had incredible reviews online, but it was over an hour wait just to get a table!) for supper was more challenging than we imagined, but we finally managed to get some takeout pizza (I ate food we’d brought from home, see below) and retreated to our hotel room for a movie and supper.

This was the motel we had switched to when we were forced to rebook after realizing our date error (originally, we were slated to stay at well-reviewed cabins).

There was a reason there was an opening at this motel. From water stains in the bathroom to bugs on the floor to doors that didn’t close properly, this location didn’t instill much confidence. But there was nowhere else to go and really, how bad could it be?

We woke in the night to people socializing – loudly – outside our window. When I finally got back to sleep, I woke up to the sound of torrential rain. It wasn’t a great night of sleep. I was relieved when morning arrived, and we had positive attitudes – looking forward to moving on. And then we started the shower. Within a few minutes, the entire hotel room floor was flooded in water. We could see where they had patched the plumbing and it was easy to identify the source of the leak. When John went to check out and informed the front desk of the issue, he said they didn’t even act surprised. Needless to say, we did not stay for the free breakfast and will not be returning to that location again!

Saturday was the “big” day as we had eyes on hiking the Skyline Trail, which has arguably the most famous view along the Cabot Trail. I’ve already written an entire post about this adventure. We hiked the whole loop, which was about 8 km, and the views were stunning.

We’d had some drizzle and fog earlier in the day, but with the tremendous views, we couldn’t have been happier. We also timed it right. When we arrived about 10:30, the parking lot was mostly empty. When we returned it was absolutely jammed with cars!

We stopped in Cheticamp and found some lighthouses, including one with a built-in slide. The kids absolutely LOVED this and spent a happy half-hour sliding and climbing. John and I each went down the slide and once was enough. Phew, it was much steeper and faster than it looked (I actually had bruises from it), but the kids knew no fear!

We walked along the Inverness Boardwalk, drove through Margaree Harbour and ended up in Port Hawkesbury for the night. We were all tired, so McDonalds across the street was our fancy supper (we took food along for at least 1 picnic meal/day). After a good night’s sleep, we hummed and hawed about going to the pool. After the disappointment of the previous hotel pool (and all the effort that goes into getting dressed, going down, and then promptly getting out), none of us was convinced. Well…we went and it was wonderful. It was warm and we had it entirely to ourselves. Levi practiced swimming from side to side, Abby did flips and tricks and we all left happy.

From there it was back to Wolfville. A fun long weekend. Lots of driving, but the kids were phenomenal (we let them watch downloaded videos on some of the longer stints, but they were mostly contented to watch the views most of the way).

A quick note about food

I was in the middle of an elimination diet (no gluten, no peanut butter, no coffee, no soy, no dairy), so I was already planning to bring along lots of food items. But, as a great way to save, we also packed food appropriate for daily picnics.

This was the main launch point for our PB&J summer – I took a package of brioche buns, a bottle of peanut butter, and a bottle of jam. We took ice, so the first day had tuna filling, hard-boiled eggs, cheese, and gluten-free crackers. I also brought along things like apples and carrot sticks; we had mini-fridges at night, but these items were okay to be in the cool, but not cold, environment of the trunk. We also took nuts/seeds, dried fruit, granola bars, crackers, and tinned sardines/smoked oysters (both of which our kids love). We ate breakfast and supper out each day (I would often just piece together fruit/proteins we brought from home for myself), but ate lunches/snacks on the go which made our travel more efficient and cheaper!