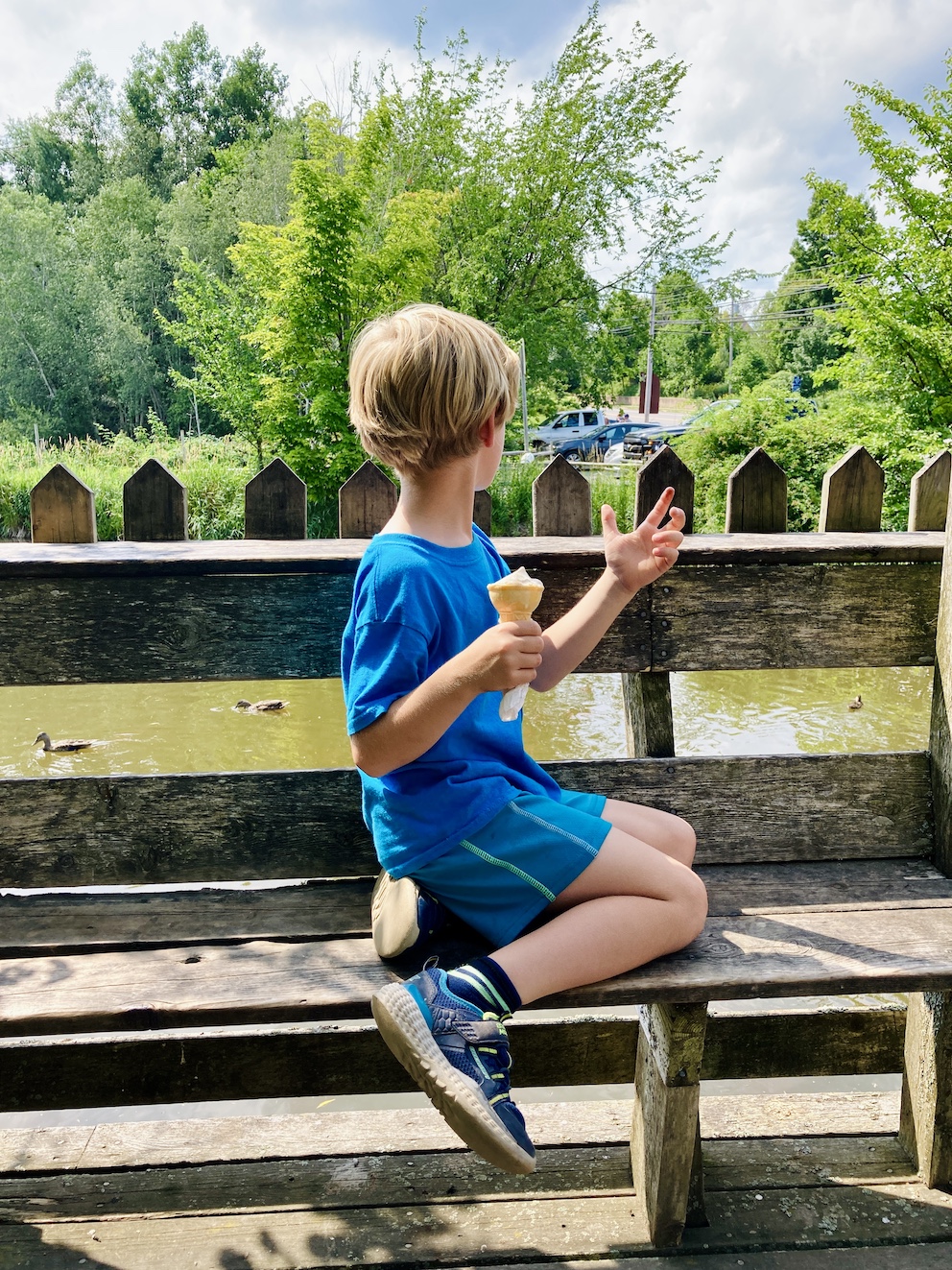 How could I do a week of food-related posts and not wade into the murky waters that is feeding children. I feel like I have relatively little drama to report, but it’s always interesting to see how different families navigate the potential minefields associated with nourishing finicky eaters.

What do your kids eat?

Mostly they eat what we eat. This was our plan as soon as they started eating solids. But, there are definitely some caveats to that.

While we rarely cook a separate meal for our kids (except on Saturday and Sunday evenings when John and I have an in-home date), their relative serving sizes of various items can vary. Saturday or Sunday they’ll tend to have something easy and “kid” friendly like boxed Mac n’ Cheese or Naan-bread pizzas or cheese omelets, and the other supper is typically leftovers.

Occasionally I’ll make a meal that’s, how shall I put this, not their “favourite” (trust me, they use much stronger language in describing it). If there are leftovers and I can’t bear the thought of fielding endless complaints and a 50-minute timeline for eating 6 bites, I’ll let them have something different in place of the leftovers (it’s typically something delicious, like a Thai stir-fry, they’re balking at, so larger servings of the leftovers for the adults is a good thing).

What if they refuse to eat something?

We’re largely past this stage. At 6.5 and 10.5, while they might voice a strong opinion about something, the worst they do is complain. Occasionally someone (ahem, the 6-year-old) will refuse to eat a particular meal – this usually requires some perfect storm of a less-preferred food item + some emotional response (tired, fighting with his older sister). We tend to not make a huge deal of this but will give a timeline that the food will be available. After that point, the kids are expected to wait until the next meal. When they were little we used to say: “Well, hopefully, you like the next meal more.” Between the two of them, a handful of meals have been skipped over the years – no one starved and they have pretty solid eating habits.

Mains are enforced, sides are not

One child adores olives, the other hates them. One tolerates raw bell peppers, they make another child gag – literally. I try to have options. I like to incorporate things they don’t like in ways that are more palatable (I make a chicken curry with cooked, diced bell peppers and no one complains; I’ll dice up mushrooms in chili and no one notices). If we’re having a roasted chicken and there are two vegetables, I’ll let the kids chose only one if they like.

they eat a lot more gluten, dairy and sugar than I do

It is a PB&J summer for them, after all. After completing a Whole30 (see below), I don’t think anyone is dramatically impacted by any specific food group.

They eat toast once a week or so; their cereal is “healthier” but still comes with sugar added. While they may naturally eat less gluten/dairy/soy/sugar than some of their peers simply because I avoid most of those things in my cooking – I don’t stop them from consuming those foods, especially when out and about.

I do try to at least temper their access to sugary treats, but it seems every event (camps, potlucks, meals with friends, the never-ending stream of birthday parties) comes with some dessert option and for now I let them go with it. I have a hard time resisting homemade sweets so my solution has been to dramatically reduce the number of homemade sweets I make. But they still have lots, and lots, and lots of treats.

what about elimination diets? did they do the whole-30 with you?

Last year I cut out caffeine, dairy, soy, peanut butter, garlic and gluten for almost 3 months. The only major culprit I could isolate was garlic – how ironic, as I LOVE garlic. I did not have the kids adhere to any of these changes (aside from the fact that I wasn’t making shared dishes with soy sauce, peanut butter, garlic, etc). But their school lunchboxes stayed the same, they still had dessert, peanut butter on toast, and milk on their morning oatmeal.

When we did Whole30 last June, the kids came along for the ride. It went remarkably well (though I didn’t feel great, likely in large part due to the excessive and daily consumption of garlic, which I’ve now isolated is a real trigger for me?!). The ONLY struggle was cow’s milk. Oats are considered off-limits for Whole30, and almond/cashew/coconut milk just did not meet muster for one child. We all survived it, but there were a few tears over the one month off cow’s milk for said child (who, also ironically, had a dairy allergy as a baby).

How do you get them to eat things they don’t like?

My goal as a mother is not to inflict culinary misery on my kids. I don’t want them to grow up feeling like they have to like everything and I think there are some challenges from my own childhood that are rearing their head now in my eating habits (not being able to detect hunger cues, feeling the urge to clear my plate at EVERY meal, despite fullness, to access dessert).

That said, I try hard to make meals that are healthy, engage their palate, but don’t directly interfere with their likes/dislikes. Left to their own devices, neither of my kids would take veggies with their meatballs and rice. But it’s non-negotiable for me. My kids eat salad and curry and, yes, even stir-fries every once in a while. They don’t ask for a different meal because that has never been the expectation (they do, however, sometimes complain about what’s on offer).

The preschool program both kids attended as youngsters would ask each child at meal times: “Would you like a lot or a little.” A little could mean one green bean from the backyard garden, but it was all about trying new things. I think giving kids a sense of control, while concurrently nudging them to try new flavours and gain experience in curating a broad palate, is an important part of growing up.

I also don’t think that having a picky eater is necessarily an indication of future preferences. I didn’t have a broad palate as a child (though I did have to eat what was put in front of me) and now love a huge range of foods that would be foreign to my parents. My father cannot wrap his head around why anyone would eat sushi, for instance. Also, I once went to a delicious Indian restaurant with my brother and parents. My Dad took one bite of the basmati rice and said “This tastes like cardboard.” For some context, I grew up on Minute Rice…

What COULD use some tweaking?

My eating habits are always evolving and, at this point at least, this has very definite impacts on the kids. They eat nutritional yeast and nori and banana ice cream and drink sparkling water because the adults in the house – who have the buying power – do.

There are always improvements that can be made both in the food itself and consumption patterns. I definitely eat too fast. The kids are a bit slower, but I think we’d all do well to pace ourselves and enjoy the process of eating a bit more, allowing our food to digest and our conversations to grow (the sad reality is a delicious meal that took 2 hours to prepare, can take 5 minutes to eat).

I’m curious to see what food preferences crop up as they get older and develop more mature palates. I’m aiming to give them a good foundation – and the rest will be up to them.